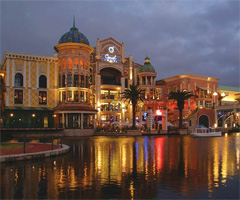 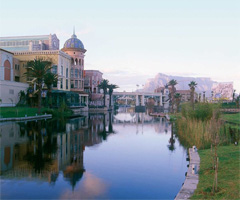 Canal Walk Shopping Centre is Africa's leading super-regional retail mall. Its dominant presence attracts diverse shoppers from an extensive portion of the Western Cape, and further afield, with its comprehensive retail and leisure options. Canal Walk merges the world's most desirable brands with shopping convenience and entertainment with everyday leisure, all in a majestic setting.  It is located at Century City, a 250ha city in the making, midway between the Cape Town and Bellville CBD's. Total development at Century City since 1995 has topped R18 billion. More than 400 000m² of office and retail space has been built to date and Century City has become an important office node in the Western Cape having attracted new regional offices for a growing list of blue-chip companies such as Liberty Life, Discovery, Vodacom, Pricewaterhouse.  Canal Walk's international, national and local visitors are provided the highest level of service from its world-class Visitor Information Centre, offering everything from travel bookings to gift card sales. The convenience continues on every level with extended trading hours from 9am to 9pm every day and easy access directly from the N1 Highway. Blue chip companies have office space in the two eight-storey office towers situated directly above the mall. The East and West Towers of Canal Walk offer a combined 16 stories of state-of the art office space. With spectacular views of Table Mountain and Robben Island and easy access from the N1, these towers promise city sophistication in a tranquil and scenic setting with plenty of parking. The more than 400 shops, restaurants and services of Canal Walk are a short lift ride away.